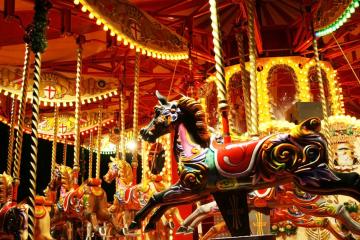 SOUTHAMPTON’S Christmas Market has been saved – just three weeks after the operator pulled out.

Another company has agreed to fill the gap left by Wela Märkets, which dropped a bombshell last month by announcing that this year’s event would not take place.

The city council has revealed that S&D Leisure has stepped in at short notice and will operate a similar attraction from November 17 until December 24.

Southampton residents were left shocked and disappointed after the operator pulled out three weeks ago (Image: Newsquest.)

The council leader, Cllr Satvir Kaur, said: “Since the sudden and disappointing news from Wela Märkets, we’ve been working hard to save Christmas in Southampton.

“I’m excited that S&D Leisure, who have a strong track record in delivering Christmas in places like Manchester and Bournemouth, will be in Southampton during this year’s festive period.

“It means small businesses that were hoping to trade can still do so, and we can still offer an exciting mix of entertainment, food, drink, and shopping.”

Cllr Kaur listed some of the other festive events taking place in the city, including the Christmas light switch-on outside the Marlands, the ice rink at West Quay, and the Bavarian Wünderland in Guildhall Square.

“There is plenty to delight all ages and backgrounds this Christmas in Southampton,” she said.

S&D Leisure has staged Christmas markets in towns and cities across the country, including Bournemouth (Image: Newsquest.)

S&D Leisure is vowing to deliver a variety of Christmas traders, festive bars with live music, visits from Santa, and a mouth-watering array of festive food.

Managing director Stanley Reeves said: “We’re pleased to be stepping in to provide a Christmas market in Southampton this year and we will do our best at such late notice.

“Although we know it will be a challenge, our brilliant team is working hard to bring extra sparkle to Southampton with lots to see and celebrate this season.”

Visitors to the market can expect a traditional horse carousel and other children’s rides.

The bars will offer festive Glühwein and hot mulled cider. Traders will sell treats such as crêpes, German sausages, cheeses and other Christmassy nibbles as well as gifts.

The launch of the market on November 17 will coincide with Southampton’s Countdown to Christmas event. Organised by GO! Southampton and starting at 4pm, it will boast a range of attractions including a roaming theatre and live on-street music. The market will run until December 24.

Father Christmas is due to make an appearance at Tudor House & Gardens.

Don’t just take my word for it – subscribe today.