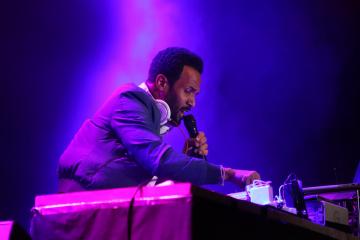 CRAIG David went back to his Southampton roots to show off the city where he grew up as he promoted his new book and record on national TV.

Viewers of The One Show were treated to a look at the area where the Seven Days singer-songwriter and DJ lived and some of his old haunts.

It’s been 22 years since Craig had his first number one aged 19 and he’s enjoyed a two-decade career that continues to see him sell out arenas all over the world. His latest record is called 22 and the book, What’s Your Vibe?: Tuning into your best life, talks of bullying and depression.

Craig was filmed returning to the Holyrood Estate where he grew up in a second-floor flat. “It’s that bedroom that was the heart of everything,” he told the camera.

He met his ex-Ebony Rockers bassist dad George on the corner of Ogle Road where a mural now proudly depicts the iconic reggae band.

The pair took a trip to the former West Indian Club, in the old St Matthew’s Church on Trinity Road, where as a youngster Craig got his first taste of performance when he took over from DJ Flash. “I ran over to the DJ booth when Horace Brown’s The Things We Do For Love was playing. I just started to ad-lib as I know that song so well,” he said.

Craig went on to talk about DJing at the Old Oriental in Queens Terrace where he met Mark Hill and Pete Devereux of Artful Dodger. They collaborated on the smash hit single Re-Rewind before Craig’s first solo hit Fill Me In.

He has since had 20 UK Top 40 singles, and seven UK Top 40 albums, selling over 15,000,000 records worldwide as a solo artist. Craig, who was appointed MBE in the 2021 New Year’s Honours, has enjoyed a huge career resurgence in recent years with his TS5 DJ set.

The filming ended with Craig sitting around the dinner table with mum Tina, dad George and sister Amber. “Coming home and being with my family is all I’ve ever wanted,” he said

Don’t just take my word for it – subscribe today.