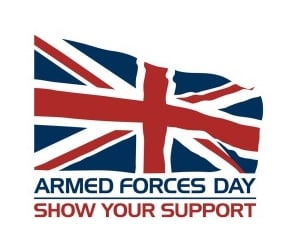 Armed Forces Week and Day is a chance to show your support for the men and women who make up the Armed Forces community, from currently serving troops to Service families, veterans, reservists and cadets.

Although we aren’t able to have our usual Armed Forces Day Parade due to Government social distancing guidelines, there are many ways that people, communities and organisations from across Southampton can show their support throughout the week and get involved:

A representative from 165 Port Regiment Royal Logistic Corps will join the Right Worshipful Mayor of Southampton, Councillor Susan Blatchford and her Chaplain for a flag raising ceremony, this will be broadcast live on the council Facebook channel at 11am on Monday 22 June.

Reserves Day will take place on Wednesday 24 June to recognise the valuable contribution reservists make to the Armed Forces.

The reserve unit at Blighmont Reserves Centre, Millbrook, have teamed up with Southampton City Council to create a short film about what it means to be an armed forces reserve which will be premiered on the council’s social media channels on the day.

Discover amazing local military history from the council’s Cultural Services team over at @SeaCityMuseum and @SouthamptonStories on Facebook and Twitter. They will be sharing some fascinating stories and images from the Southampton Stories exhibition at SeaCity Museum though the week, such as the story of a young sailor who won a Victoria Cross for his brave action in July 1940.

Residents and Businesses are encouraged to fly the armed forces flag, bunting or banners on Armed Forces Day on Saturday 27 June.

Share your photos of your decorations and you saluting using the hashtag #SouthamptonSupports, #ShowYourSupport and #SaluteOurArmedForces, and we’ll share it on our social media channels.

The whole of Southampton 02 Guildhall will be lit in Red, White and Blue for the week from Monday 22 June, in honour of the cities armed forces community.

Councillor Satvir Kaur, Cabinet Member for Homes and Culture, said: “Southampton is steeped in armed forces history, from being the home of the Spitfire to having a world-renowned port that was used in both world wars. The city’s annual Armed Forces Day Festival that attracts thousands unfortunately will not be possible this year; nonetheless, activities for Armed Forces Week and Day will build on our virtual activities that took place for the 75th Anniversary of VE Day in May, which saw many within our local communities celebrate our amazing armed forces and military history from home. This is an opportunity to show our support and recognition to those that have, and continue to, fight for peace and our freedom.”

For more information, visit got to Visit Southampton.

Local support for veterans and the armed forces community can be found here:

Southampton City Council was awarded Silver by the Defence Employer Recognition Scheme in 2018, in recognition of our values aligning with the Armed Forces Covenant and the support given to the defence and armed forces community.

A FUND launched in honour of a Southampton teenager who lost his battle with cancer will receive a theatrical boost this week. Daily Echo Southampton…

Michael Gove was trapped for more than half an hour as he visited BBC Radio 4’s Today programme with Nick Robinson. Daily Echo Southampton…

HE WAS at the managerial helm as the British sailing team celebrated its most successful performance at the Olympic Games since 2008. Daily Echo Southampton…