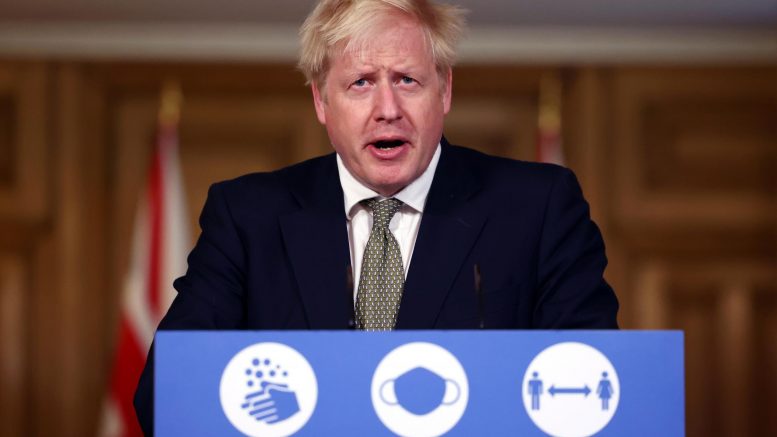 We’ve put together a round-up of everything you need to know.

When will the second national lockdown start across England?

The PM said the national lockdown will start at one second past midnight on Thursday, November 5, and will last until Wednesday, December 2.

What did the PM say – and what are the rules?

In a press conference from Number 10, Boris Johnson said “no responsible Prime Minister can ignore” the rising rates of Covid-19 infections as he announced a new lockdown for England.

He said “we need to be humble in the face of nature”, adding that the virus was spreading even faster than the worst case scenario envisaged by scientists.

The national lockdown which will see the following places shut from Thursday, November 5 until Wednesday December 2:

People will be told to stay at home unless they have a specific reason to leave.

They will be allowed to leave for work, if they cannot work from home – including those who work in the construction and manufacturing sectors.

The following places will remain open:

People will be allowed outside to exercise and socialise in public spaces outside with their household or one other person, but not indoors or in private gardens, and will be able to travel to work if they cannot work from home.

MPs will vote on the new measures before they are introduced at 00.01am on Thursday, and when they lapse on December 2, the current tier system will be reintroduced.

The hope is that Covid-19 cases will drop low enough to keep on top of outbreaks at a regional level.

Apologising to businesses, Boris Johnson has said the Government will extend furlough payments at 80 per cent for the duration of the new national lockdown measures in England.

The Prime Minister said: “I’m under no illusions about how difficult this will be for businesses which have already had to endure such hardship this year and I’m truly, truly sorry for that – and that’s why we’re going to extend the furlough system through November.

“The furlough system was a success in the spring, it supported people in businesses in a critical time. We will not end it, we will extend furlough until December.”

He said the measures would be time-limited from November 5 to December 2, when restrictions would be eased and regions would go back into the tiered system.

He added: “Christmas is going to be different this year, perhaps very different. but it’s my sincere hope and belief that by taking tough action now we can allow families across the country to be together.”

Boris Johnson said “rapid turnaround” tests will be used to reduce the prevalence of the virus, and tests of “whole cities” and will be rolled out within days.

The Prime Minister told the Downing Street press conference: “We now have the immediate prospect of using many millions of cheap, reliable and above all rapid turnaround tests.”

He said these will “drive down the disease”, the Army has been brought in to assist the logistics and a rollout will begin in a “matter of days”.

“Over next few days, weeks, we plan a steady but massive expansion in the deployment of these quick turnaround tests, applying them in an ever-growing number of situations from helping women to have their partners with them in labour wards when they’re giving birth, to testing whole towns and even whole cities,” he said.

What did Professor Chris Whitty and Sir Patrick Vallance say?

Chief Medical Officer Professor Chris Whitty warned that the prevalence of coronavirus has been increasing “extremely rapidly” in recent weeks.

Citing Office for National Statistics data, the chief medical officer for England told the Downing Street press conference: “The prevalence of this disease has been going up extremely rapidly over the last few weeks, having been very flat due to the work of everybody in the country over spring and summer.

Professor Chris Whitty said the number of people in NHS beds in England will exceed the peak of the first wave without further measures.

The chief medical officer for England told the Downing Street press conference there is an increase in prevalence “in virtually every part of the country”, apart from possibly the North East where stricter measures are in place, and cases are not constrained to one age group.

Discussing NHS bed use in England, he said: “Currently only in the North West is this coming close to the peak that we previously had, but it is increasing in every area.

“And if we do nothing, the inevitable result is these numbers will go up and they will eventually exceed the peak that we saw in the spring of this year.”

More people could be admitted to hospital over the next six weeks than was seen over the first wave, Sir Patrick Vallance has said.

Projections suggest this would be seen “across the country as a whole” with “some hospitals earlier than others, some a bit later”, Sir Patrick warned.

The models suggest “increasing deaths over the next six weeks”, with a figure close to the first wave peak by December 8 “if nothing is done”.

“Clearly if you stop the R from increasing, if you allow R to come down then you would flatten this off and then potentially reverse it,” Sir Patrick said.

“But on the current trajectory that is what is thought to be the prediction for deaths over the next six weeks and of course that would continue to go up because the hospitalisations already exceeded the first wave peak by this time, deaths would follow.

“So unfortunately that’s a very grim picture in terms of what this looks like in the absence of action and continued growth.”

What has the reaction been to the PM’s announcement?

Market confidence has been “hit hard by the unclear, stop-start approach” taken by governments across the UK during the pandemic.

He said: “Many firms are in a much weaker position now than at the start of the pandemic, making it far more challenging to survive extended closures or demand restrictions.”

He called for Government support for businesses facing hardship, whether through loss of demand or closure, to be boosted.

He said: “The Government must not squander the time afforded to them through another lockdown to enable mass testing and fix test and trace systems – which hold the key to a lasting exit strategy for both public health and the economy.”

Paul Charles, chief executive of travel consultancy The PC Agency, said: “The winter period is always tough for the travel sector but this is set to be ultra-cruel.

“I hope that Rishi Sunak recognises the extreme challenges ahead and offers support to the sector. It’s going to need it.

“Job losses and company casualties are going to be widespread sadly and my fear is that this lockdown will be harder to ease than it is to switch on.”

Anne Longfield, the Children’s Commissioner for England, tweeted: “Suggestions that schools will stay open during a forthcoming lockdown are very welcome. We’ve always said that schools should be the last to shut & first to open. It would be a disaster for children’s well-being and education if they were to close.”