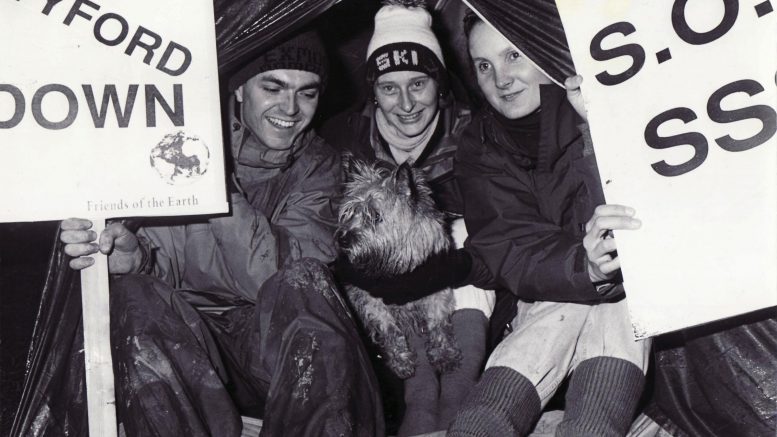 A BOOK to celebrate the environmental protests at Twyford Down in the early 1990s is in production.

One of the protesters Helen Beynon has written the book and launched a crowdfunding campaign to pay for printing and distribution.

The campaign against the building of the extension through Twyford down was the first major anti-roads protest, with the Department of Transport seeking to replace the A33 Winchester bypass with a motorway cutting through the down.

This was the first time direct action on this scale had been taken against road building in the UK and the protests have now, for the first time, been captured in print.

Ms Beynon has spent the last few years tracking down others who were there and recording their stories. These interviews, which include local residents, student activists and the ‘Dongas Tribe’ who lived on the route of the road, have been woven together to tell the story of Twyford Rising.

She said: “Twyford Down was a beautiful and remarkable place, loved by the generations who walked there and by those who lived on the route of the road and blockaded the bulldozers. It was because it was so well loved that an unlikely alliance of people came together to defend it. My book tells how Conservative Party members joined forces with ‘new age’ travellers and women from the Greenham Common peace camp to fight the road. Images of people obstructing machinery and climbing trees became a familiar part of environmental campaigns after Twyford, but back then, this was new.”

Helen has linked the interviews with a narrative that explains the background to the protests and is rich in description of the landscape now lost to the road. Twyford Rising is also illustrated with photographs and leaflets from the time.

Rebecca Lush, grew up in Hampshire and was one of those who went to prison for her part in the protests. She is still involved in campaigning against road building and now works for the Transport Action Network .

She said: “Twyford Down was the birth place of the modern environmental protest movement – anti-fracking campaigns and Extinction Rebellion all flowed from this source. Twyford Rising is not just a great story, but helps us understand today’s protests and is packed with inspiration for current campaigners. Unfortunately the Government is still planning more roadbuilding which will drive up carbon emissions and air pollution, and damage more landscapes and green spaces, so there’s still a need to campaign on road-building.”

In order to print and distribute the book, Helen has set up a crowd fund which raised over £2000 in the first two days and is still rising.

Once completed, Twyford Rising will be launched in Winchester.