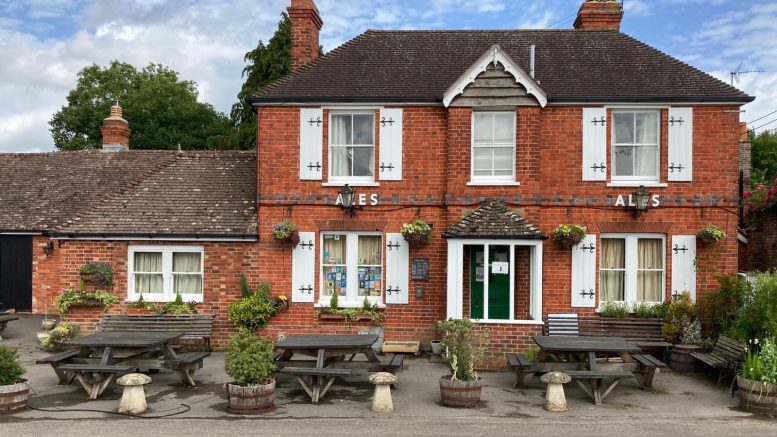 IT’S the Hampshire pub set in ten acres – with a growing family at the helm.

There’s no problem with social distancing at The Hampshire Bowman at Dundridge where there is outdoor seating for 400 and plenty of space for you to pop up a gazebo, enjoy a pint and an al fresco lunch with your family or let the children enjoy the play equipment.

You may be served by a landlord whose connection with the country pub close to Swanmore goes back over 30 years.

Mark, 35, and 28-year-old Chloe Newman, who met at the pub when they both worked there for the previous landlady, became one of the youngest couples to run a pub when they took it over in 2012.

Since then, they’ve married, with the perfect reception venue sorted, and had a family. Youngest child Wilfred is just ten days old and has joined Edward and Ivy as Mark and Chloe’s three under fives.

The pub is, of course, very family friendly, and pooches are welcome to join pub dog Iris, a labradoodle.

It’s the same welcoming country pub that Mark remembers from his formative years. His parents remain locals, living in his childhood home about a mile away across fields.

“This is very much my local. I’ve been coming here all my life,” says Mark, who can normally be found in the kitchen preparing pub classics like scampi and chips, macaroni cheese and burgers, if he’s not behind the bar.

“It’s a little bit like having two pubs. A huge outdoors pub welcoming thousands of visitors in the summer and a cosy country pub just for locals in the winter.”

The ten acre space, about two acres of which is taken up by the pub and overflow car park and about one acre of which is set aside for the archery club, was very much enjoyed by the Newman children during lockdown.

But, as time went on, Mark and Chloe began to worry about the future.

“We went straight into lockdown after a tough winter as it was so wet and the lane outside floods. We then had ten weeks of glorious weather while we were shut, which was heart-breaking.”

But with Government grants and the furlough scheme plus rent and rates holidays, the couple are feeling hopeful for the future.

The Good Beer Guide featured Hampshire Bowman always has five or six ales available straight from the barrel and has a ten strong cider list, said to be the best this side of Salisbury.

It is thought to date back to 1700 when it was a coaching inn, possibly called The Three Elms, on the route to London across the South Downs.

In 1896 the premises, by then known as The Dundridge Hotel, caught fire. The following year, the current building opened as The Jubilee with 1897 being Victoria’s Diamond Jubilee year.