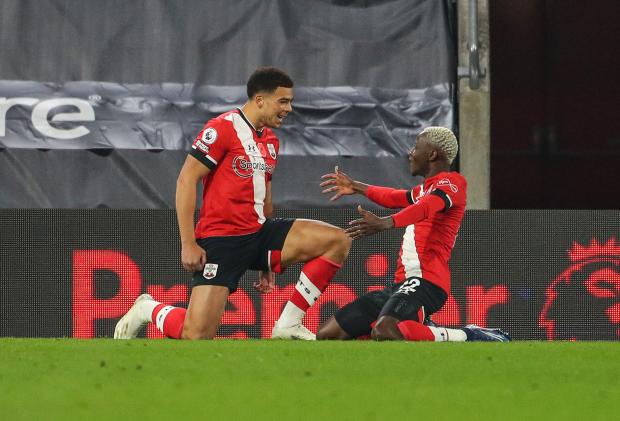 A DAY after bonfire night – Che Adams’s rocket helped send Saints soaring to the top of the Premier League.

The in-form frontman’s magical right-foot strike sparked Friday night delight for Ralph Hasenhuttl’s men, who reached the summit of the top flight for the first time since September 1988.

Adams struck after just seven minutes with Stuart Armstrong also getting on the score sheet to earn Saints 2-0 victory over Newcastle at St Mary’s.

The result saw them go top on goal difference ahead of defending champions Liverpool – having played a game more than the Reds.

Unbeaten in five ahead of kick-off, Saints were forced into two changes from the side that overcame Aston Villa 4-3 away from home last time out.

With no Ryan Bertrand due to a hamstring problem, Jack Stephens made his first start since September as a makeshift left-back.

With Danny Ings ruled out for up to six weeks with a knee injury, Moussa Djenepo returned to start following a hamstring issue of his own.

Theo Walcott, playing his 350th top-flight fixture, switched to play up front in his first game back at St Mary’s since returning on a season-long loan from Everton.

Midfielder Ibrahima Diallo, who had picked up a dead leg against Villa, was fit enough for the bench.

Newcastle, yet to lose away from home in the league this season ahead of kick-off, were unchanged from the team who beat Everton 2-1 last Sunday.

Fireworks were set off near St Mary’s just after kick-off time but a fizzer from Adams set Saints on their way after just seven minutes.

After the striker’s initial shot from range was palmed away by Karl Darlow in the Magpies’ goal, Kyle Walker-Peters robbed Miguel Almiron of the ball on the right.

And after Walcott’s cutback was played perfectly into the path of Adams, his fierce effort fizzed into the net to open the scoring.

Saints were well on top during the opening 15 minutes. After Oriol Romeu won possession back in midfield, he fed Walcott to drive at goal before sending a right-foot effort wide of the post.

The hosts’ first moment of worry came with 19 minutes on the clock. An out-swinging corner evaded Alex McCarthy, who had attempted to claim.

But visiting skipper Jamaal Lascelles’s header was tame and did not trouble the hosts’ goal.

McCarthy was on hand to keep his side a goal up moments later, however. He gathered Sean Longstaff’s header after Jamal Lewis had delivered from the left flank.

Saints saw plenty of the ball in the opening 30 minutes but the game’s first caution came with them thwarting a Newcastle counter-attack.

As the dangerous Allan Saint-Maximin looked to drive forward – the Frenchman was wiped out by a sliding challenge from Romeu.

Saints could have had a second in glamourous fashion three minutes before the interval. After Walker-Peters won the ball out wide, Djenepo’s dazzling flick was played perfectly into the path of Walcott.

Saints could have increased their lead through a pair of chances just after the break.

James Ward-Prowse’s corner was headed down by Jannik Vestergaard into the path of Jan Bednarek. The defender’s effort on goal was cleared off the line by Lascelles.

Shortly after, Romeu let fly with a rasping effort from range which was stunningly tipped onto the bar by Darlow.

The hosts then had huge shouts for a penalty turned down on the hour mark. Djenepo cut inside and appeared to be blocked off by Jacob Murphy – referee Peter Bankes as well as the VAR said no.

Saints continued to knock on the door. Bednarek’s powerful near-post header forced a sublime reaction save from Darlow, who was keeping Newcastle in the contest.

Hasenhuttl’s men could have wrapped up the game on the counter 15 minutes from time.

Armstrong played in Walcott on the counter with the former Arsenal star caught in the box by a sliding challenge by Lascelles – no penalty was given.

But the game was wrapped up by the hosts with eight minutes remaining.

After winning the ball in a dangerous area from Sean Longstaff, Scotland star Armstrong twisted and turned before smashing past Darlow to seal all three points.

McCarthy then kept his clean sheet intact with a flying save to deny Joelinton late on.