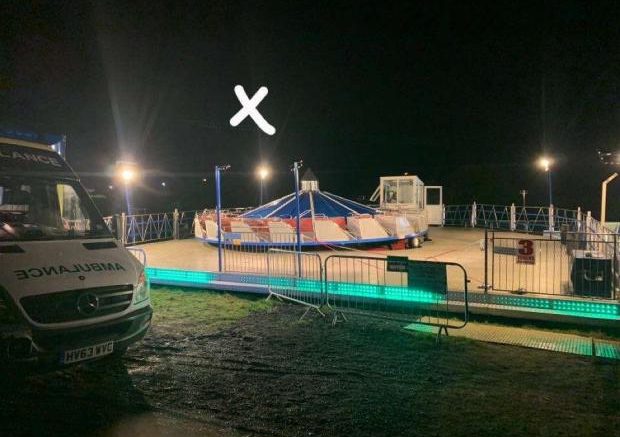 A teenager has described how she was flung from a fairground ride while “20ft high in the air” after the seat barrier apparently came loose.

Erin Jennings was with friends at the Charles Cole’s Family Funfair in Southampton on Saturday when the accident happened.

The 17-year-old, from Southampton, suffered a black eye and a suspected broken rib in the fall and was taken to hospital for treatment.

She said: “I do not really remember anything about it. I remember getting in but I do not remember much after until I was in the ambulance and people were talking to me.

“My eye and face hurt and I went back to hospital because of the way I was breathing and a pain in the ribs, it could be a fracture.”

She added: “I am glad I can still walk. I am lucky that I do not have any serious injuries. There were children on the ride and it could have been much worse.”

Erin said that she believed the metal bar acting as a restraint had come open causing her to be flung from the ride.

She said her parents had contacted the funfair organisers but had not had a response from them about what had happened.

Friend Ella Anderson, 18, said: “We got on the ride and they must not have shut the gate properly, it flew up and Erin flew out.

“They stopped it and I was able to get out but none of my friends could and I ran to Erin – I thought, honestly, she was dead. It was awful.

“We thought at first she had landed on some metal but luckily she landed on the grass. I could see she had hurt her eye but I couldn’t tell if anything else was wrong. It was really frightening.”

Speaking to the Echo, owner of the funfair Charles Cole said: “At the moment, we’ve had health and safety down, they’ve viewed the ride.

“We’ve had various other people, the testing body in, they haven’t found anything wrong with the ride. We’ve just got to have an investigation now to find out how the girl actually came out.

He added: “At the end of the day we’ve got to find out who’s fault it was. We can’t pass anymore judgement until the ride is fully set up again where it will be reviewed.

“Everything is being looked into at this present moment.

We personally have never had an accident before. It’s all being looked into, everything will be dealt with in due course.”