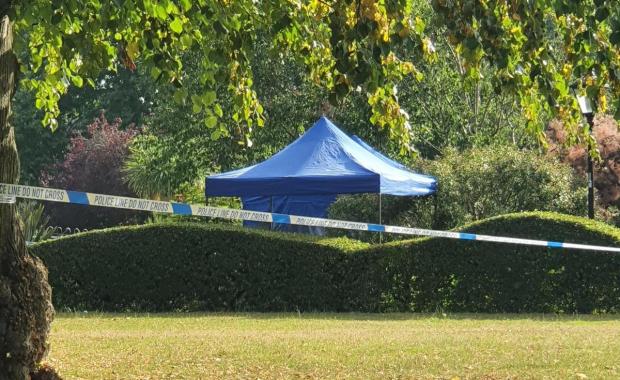 Gangs of youths may be targeting each another with weapons in the city centre, according to police.

Officers have been given special powers to tackle serious violence.

It comes after a 27-year-old man was stabbed in East Park last night.

He was rushed to hospital where he remains in a stable condition.

Officers in Southampton will be able to stop and search anyone in the city centre and the surrounding areas of Southampton tonight.

They have received reports that groups of young people may be targeting one another with weapons.

Officers investigate a stabbing which happened on Thursday night in East Park, Southampton

Officers will be looking to stop those looking to cause serious violence and carrying offensive weapons or bladed articles.

Officers patrolling the area are able to stop and search anyone while Section 60 is in use.

As a result, officers patrolling the area defined in the map will be able to stop and search anyone in the area between 5pm tonight (July 17) and 7am tomorrow (July 18). The power can be reviewed at that time and extended if appropriate.

Chief Inspector Ricky Dhanda said: “Section 60 is an emergency tactic. We do not suggest that it is a long term solution to violent disorder or weapon related crime, however following the serious assault that took place yesterday evening and concerns raised by the community in relation to groups of youths targeting each other with weapons, this is our response.

“We know that some will think that by advertising this tactic, it inhibits our ability to catch those carrying weapons, however it is important communities are informed we are taking action. It also helps prevent other incidents of serious violence occurring and therefore helps us prevent crime from happening in the first place.

“We are also telling you because we follow the national Best Use of Stop and Search guidance, to inform you as to why there will be an increased police presence and that we are using enhanced powers.