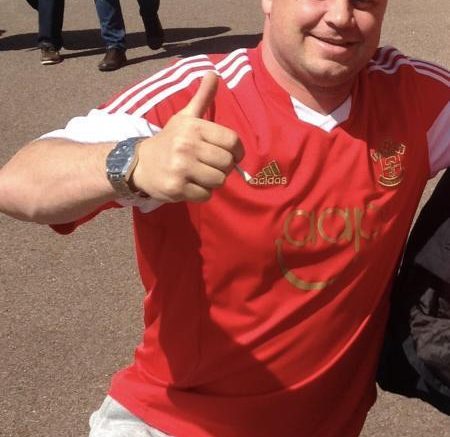 A “DIE-HARD” Saints fan has expressed his joy after being found not guilty of launching a flare onto the pitch during the derby victory at Portsmouth last year.

Dean Baigrie was “ecstatic” when Saints scored their second goal in the 4-0 Carabao Cup tie win at Fratton Park on September 24.

He threw his hands in the air and “jumped all about” to celebrate.

However, he was left “angry and upset” when he was arrested at half-time accused of throwing a blazing flare onto the pitch.

A long-term season ticket holder, Mr Baigrie has protested his innocence from the start.

Now the 41-year-old from Winchester has been found not guilty and had his case dismissed at Portsmouth Magistrates’ Court.

Mr Baigrie said: “I feel really relieved I have been found not guilty. It ruined my day at the time.

“I was so worried I would be banned from all football matches for three years.

“I am a prolific Saints fan and have travelled far and wide to watch them play.

“It was frustrating. I love my football. I used to take my dad to matches.”

“I phoned up the club and protested my innocence.

“It was frustrating. I love my football.

“I used to take my dad to matches. He was a season holder for 20 years.”

Mr Baigrie told the Daily Echo how he received hate mail from angry Portsmouth fans following the charges against him.

In his account of events, the self-employed ground worker told how a flare went off in front of him and that it was thrown by someone he didn’t know.

Mr Baigrie, who has his front room painted red and white, added: “Do not go to football matches and set off flares.

“It’s dangerous and can harm people. Go to football matches and enjoy yourself.”

Mr Baigrie has told how video footage from the match shows he never held a flare.

He now hopes Saints will return his season ticket.

Daily Echo reports from the match last year told how a manhunt was launched after football hooligans pelted police and fans with bottles.

The game was said to be the largest police operation for a south coast derby match ever.

Despite riot police forming a wall to keep fans apart, some still caused chaos and disorder by hurling coins, bottles, stones and smoke grenades at each other.

Police received reports of items launched at officers and fans in Goldsmith Avenue.

The Daily Echo has contacted Southampton Football Club for comment.