SoCo Music Project has teamed up with SO Movement to release Sounds of Southampton on November 20. The album is also available to pre-order.

It provides a platform for 24 young artists to release their music and collaborate on a compilation that showcases some of the best new grime, drill, trap and R&B that the city has to offer.

Supported by funding from Arts Council England and PRS Foundation , the programme has provided mentoring, masterclasses and industry support for these exciting new artists to progress to the next level.

SoCo/SO Mentors Tyrone, Shannon B & Sal have worked through the summer, coaching the artists and supporting them on their musical journeys.

The album is fronted by multi-million streaming rap duo Tyrone & Warbz who have had support from BBC Radio 1xtra, have featured on the UK’s biggest YouTube music platform GRM Daily and are involved in Southampton’s bid for City of Culture 2025. Tyrone is also part of top 10 official dance album charters FooR who earlier this year had their track Fresh used in the Coors light TV advert and signed to major record label Warner Music.

Tyrone told the Daily Echo: “I’m very grateful to be able to provide and be a part of a project like this. As people know it’s not easy pursuing a musical career, especially in this city. However i feel more opportunities and projects like this will develop the great talent we have within our city. Each day the community grows stronger and stronger and it’s important as a city we champion and be proud of the talent we have.”

Matt Salvage , Chief Executive of SoCo Music Project, added: “Music is such a big part of people’s lives, it can help us

through tough times and it can bring us joy when we need it most. We’re delighted to be working with such a talented

group of artists and industry professionals, supporting them to grow and find a way through this difficult industry. We

hope they get a lot of it and that this project can help them achieve so much more.” 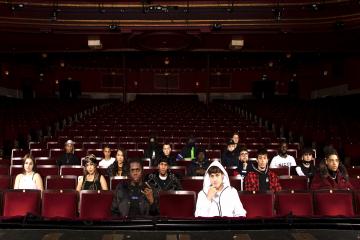 IT WAS nice to see the item in Tuesday night’s Echo about the Compass Inn and the landlady taking a step against parents and rowdy children. https://www.dailyecho.co.uk/leisure/rss/ …

THE long-standing landlady of a popular New Forest pub has banned children altogether after an incident with ‘rowdy’ and ‘badly behaved’ youngsters at the weekend. Daily Echo | News …

WE all love a good kebab – and Southampton serves some of the best. https://www.dailyecho.co.uk/leisure/rss/ …

CONCERNS have been raised over an “environmental disaster waiting to happen” at a small Southampton beauty spot. Daily Echo | News …

SOUTHAMPTON’S Disney store, popular with children and adults alike has closed its doors for the final time. https://www.dailyecho.co.uk/leisure/rss/ …