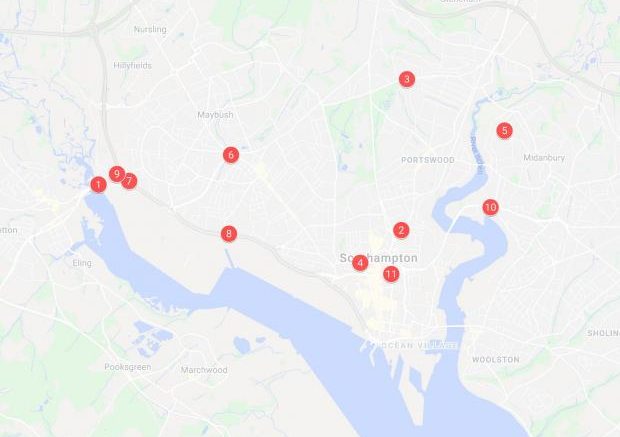 CONCERNS have been raised over health in the city after the top 11 most polluted spots were revealed.

Environmental campaigners Friends of the Earth have warned that failing to fix air pollution in the city will cost lives, and shows a “failure to address” the climate crisis as new research reveals that safe air pollution limits are being breached in Southampton.

The organisation analysed council reports on nitrogen dioxide in the air at monitoring sites across England.

But the research has been met with scepticism from a city MP who claims the city only has “one or two” air quality hotspots.

PICTURED: A map showing the pollution hotspots in Southampton

The research found ten places in Southampton where the average level of nitrogen dioxide exceeded 40 micrograms per cubic metre of air in 2018, the latest year for available data.

The average must be below 40 to meet government air quality targets, while the World Health Organisation set this as a safe limit to protect public health.

The worst offending location – at the Redbridge Causeway site – was 53.9.

According to Friends of the Earth, road traffic is the leading cause of nitrogen dioxide pollution, which can inflame the lining of the lungs and reduce immunity to infections.

Although down from 1,591 the previous year, Friends of the Earth Southampton’s Cara Sandys said the “lack of action£ is not acceptable.

She said: “This news comes as no surprise to clean air campaigners and I question why more drastic action hasn’t been taken by Southampton City Council. It’s not acceptable to just aim to be around the average level.

“However, blaming vehicle traffic is only part of the problem. Research shows nitrogen dioxide pollution from shipping is four times higher than previously thought.”

But MP for Southampton Itchen Royston Smith said that there are only “one or two” pollution hotspots in the city.

PICTURED: Friends of the Earth have raised concerns over ships at Southampton docks

He said: “Southampton has one or two air quality hot spots.

“These are caused by a number of factors but HGVs and cars are the biggest polluters.

“Vehicles are becoming cleaner everyday and the government is putting significant resources in to accelerate the use of cleaner vehicles.”

He added: “Sadly, the ill thought out carriageway changes implemented by the Labour Council will make matters far worse by increasing the time vehicles are idling while stuck in traffic jams.

“We need a comprehensive strategy not a knee jerk, economy trashing over reaction.”

Southampton Test MP Alan Whitehead explained that although the council have made a “good start” in tackling air pollution, he believes there is still more that could be done.

He said: “We have known for a while now that Southampton has a problem with air quality.

“The council have made a good start in tackling this by encouraging active travel throughout the city by building new cycling and pedestrian infrastructure.

“The plans for traffic free zones in the city centre are also a step in the right direction.

“However I believe much more needs to be done to improve air quality and make Southampton a truly sustainable city.”

Southampton City Council has controversial plans to build temporary cycle and bus lanes as part of its Green Transport Recovery Plan, which will see the installation of temporary bus lanes on both sides of the A3024 Bitterne Road West, between Union Road and Maybray King Way including the Northam Bridge.

Cycles, taxis and private hire vehicles will also be permitted to use them..

“The City Council is working towards a city that is greener, fairer and healthier. We’re committed to delivering clean air for Southampton and have set ourselves challenging and ambitious goals to help us reduce air pollution and tackle climate change.”

The new research comes as city councillors are set to approve plans for a temporary traffic-free zone in Southampton.

According to the proposals, the following measures are set to be closed to through traffic.

However, these three roads are expected to remain open to taxis, buses and cyclists.

Closures and other measures would also be put in place at Devonshire Road, Cumberland Place, London Road, Bellvue Road and Civic Centre Road.

The city council said further details including a start date for the trial as well as information on how the measures will be enhanced are yet to be revealed.