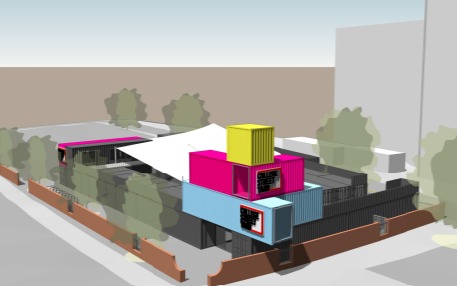 The eastern part of College Street Car Park in the city centre, could host a number of converted shipping containers that would be used for retail, food and drink uses as well as offices and studios for artists.

The proposals aim to provide a place for work, events, shopping and food and drink facilities, an official document says.

The plans put forward by Matthew Sanger are set to be discussed by the planning committee at Southampton City Council on August 25.

Some of the containers will be branded and powder coated “with vibrant colours to create visual interest”.

The eating court area would be enclosed with a tensile-fabric roof canopy, the documents say, while the containers would be double stacked on the western side to form “an upper floor bar and terrace and artist’s studio”.

The city council has received 20 letters in favour of the plans and seven objections.

Concerns were raised over the impact the development could have on noise and parking.

But other residents welcomed the “differentiated” scheme and described it as a “fantastic place for small businesses to build a reputation”. Planning chiefs at the city council said the proposed loss of 73 car parking spaces (43% of the existing parking) with 95 car parking spaces to be retained accords with the council’s transport policy. If granted, permission would be for five years. It is recommended that the planning committee approves the plan.

An official document reads: “The proposal will provide improved offering for start-ups and creative industries and will add to the vitality of the city centre. It has been demonstrated that the development will not lead to adverse noise impact and is safe in flood risk terms. Furthermore The site arrangement and appearance of the containers will not have an adverse impact on the character and appearance of the area having regard to the five year temporary period requested. The existing boundary wall and trees are to be retained and the scheme will lead to less than substantial harm to the setting of adjacent listed buildings.”