A 68-YEAR-OLD man was pulled from his van after it flipped on its side on a Southampton Road.

Emergency services scrambled to rescue a man after his VW van flipped over on Charles Watts Way at around 4.30pm yesterday.

Crews from Hightown and Redbridge Fire Stations worked to extricate the man who had been sitting in a mobility scooter “secured to the van”.

According to Hampshire Fire and Rescue Service, the 68-year-old was handed over to paramedics on the scene and no other vehicles were involved.

A roadblock was in place, however, the situation has since resolved.

The stop message came in shortly after 6pm.

The Daily Echo has contacted Hampshire Police for more information. 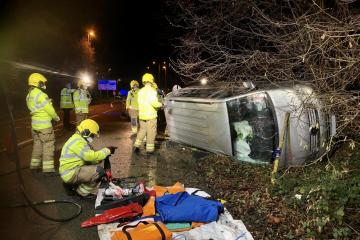