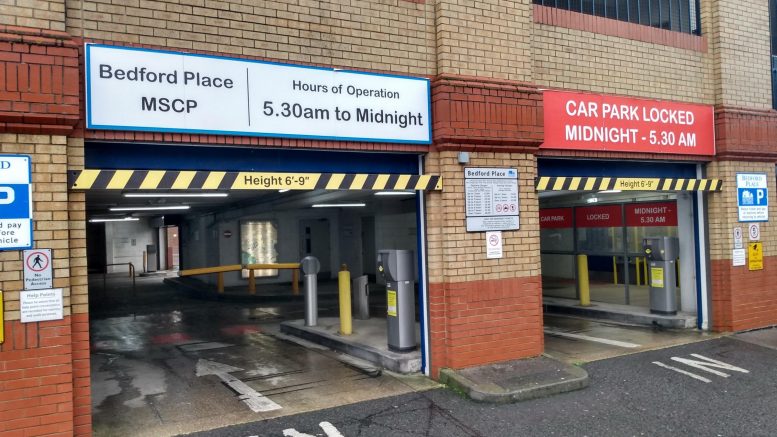 TWO men have been jailed for 18 months for subjecting a security guard to what a judge described as “shocking, unrestrained and savage” violence.

The victim, who feared his assailants wanted him dead, was kicked, punched and headbutted during a sustained attack at a multi-storey car park in Southampton.

The Kestrel Guards employee has since quit his job, Southampton Crown Court was told.

Sam Eades-Scott and Lewis Lawbuary launched their drink-fuelled, late-night attack after being asked to leave the car park, which closes at midnight.

Lawbuary was responsible for most of the violence but Eades-Scott joined in after the guard threw a punch in self-defence, the court heard.

Richard Martin, prosecuting, said the guard feared for his safety. Quoting parts of a personal impact statement he added: “He says he has never been so afraid in his life. He thought they wanted him dead.

“Mercifully he was wearing a cycling helmet.”

Eades-Scott, 25, of Canada Road, Southampton, and Lawbuary, also 25, of Hundred Acres Road, Wickham, had previously pleaded guilty to unlawful wounding. They had no previous convictions.

Naomi Gyane, mitigating for Eades-Scott, said her client went to his friend’s aid after he was punched by the guard.

But she added: “He is ashamed of his conduct and understands the seriousness of what he and his co-defendant did. He accepts it was deplorable.”

Daniel Reilly, mitigating for Lawbuary, described the attack on the guard as “ugly” and “shameful”. Referring to his client he added: “It’s a moment that is inexplicable to those who know him best.”

Judge Christopher Parker QC told the defendants: “You bullied the guard in a thoroughly ugly way. He was understandably very frightened and was acting in lawful self defence when he threw a punch.

“What followed was a scene of shocking, unrestrained and savage violence.”

Judge Parker said the victim’s cycling helmet was damaged in the attack, adding: “That shows just where your blows were directed.

“Physically the injuries were not as serious as they might have been but there have been serious and lasting psychological effects.

“The guard felt unable to carry on with his employment. He has lost not only his confidence but his income too.”