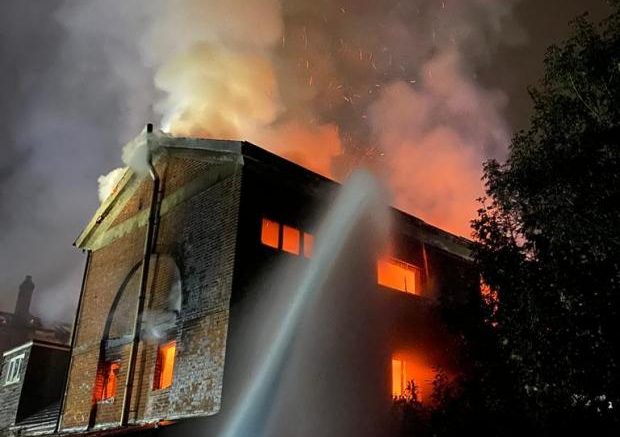 FIREFIGHTERS rushed to tackle a blaze at a derelict building last night.

Hampshire Fire and Rescue services received multiple calls of a fire at around 1am.

@hfrs_control and @Hants_fire still dealing with the large fire at Stoneham Lane, Eastleigh, please avoid the area if possible. https://t.co/10LK7oWRsE

Despite the best efforts of firefighters, the “building couldn’t be saved” and people were urged to avoid the area.

The “three-storey building suffered complete damage in the blaze which was extinguished using jets and the aerial ladder platform”.

According to Hampshire Fire and Rescue Services, further support vehicles from Beaulieu, Romsey, Basingstoke with additional appliances from Bishop’s Waltham and Alresford were used to relieve the firefighters who had been working through the night.

Due to concerns about the building collapsing, inspectors have been on the scene making assessments.

Meanwhile, fire investigators have been probing the cause of the fire.

A spokesperson for Hampshire Police said: “Police attended, investigations are ongoing but at this stage there is nothing to suggest it is being treated as suspicious.”