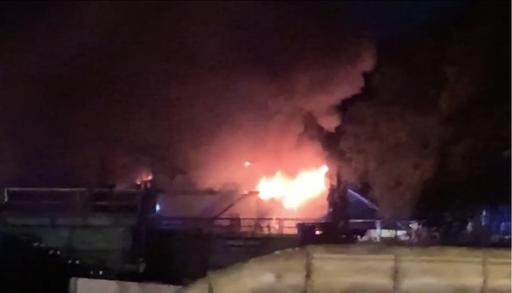 A BUSY road has been closed by police due to a large fire in a construction site.

Bournemouth Road in Chandler’s Ford has been closed due to a fire in a construction site.

The fire, next to Asda Chandler’s Ford, started just after 8pm this evening.

It is understood that the fire involves a portable container.

The site is currently under development after Village Hotels unveiled plans for a 153-room hotel along with a state-of-the-art gym, a Starbucks and a pub and grill in Chandler’s Ford.

The road has been closed as fire crews tackle the blaze.

A witness at the scene said the building site went up in flames just after 8pm.

He added that they saw “loads of fire engines” rushing down Bournemouth Road past the supermarket.

He said: “We turned around and saw this huge orange glow and realized the site was on fire.”

Hampshire Fire Control have asked people to “avoid the area”.

Fire crews from Eastleigh, Hardley and St Mary’s are dealing with the flames.