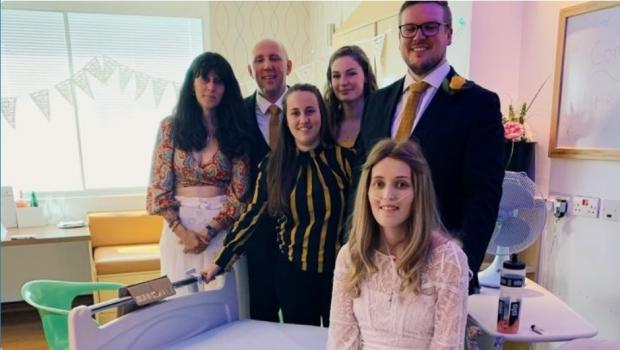 AN ADVENTUROUS and unique Hampshire woman was able to “complete it all” by marrying the love of her life just one month before she passed away.

Natasha Young, née Natasha Longhurst, has been described as a “unique, fiery, bursting with personality” 25-year-old by her family following her death after a six month battle with cancer.

Natasha, known as Tash by friends and family, was able to marry the love of her life, Simon Young, while staying at Southampton General Hospital thanks to a special ceremony and party organised by family and staff.

Now, her family are raising money for Teenage Cancer Trust and the Teenage and Young Adult (TYA) ward in Southampton General Hospital.

Tash, originally from Bursledon, worked at Winchester Cathedral and volunteered with St. John’s Ambulance in her spare time.

She had recently returned from travelling and during mid-December last year, while arranging the Winchester Christmas Market, Tash noticed a pain her lower right area of her chest.

By January 20, Tash was complaining of a pain in her ribs on the right side again.

She was referred for a CT scan due to decreased breathing sounds on the right side, which revealed a mass in her chest – believed to be a hydatid cyst – and surgery was booked to remove it.

On March 11, the surgeon found a tumour and other masses inside Tash’s chest cavity.

He was able to remove the primary tumour, but further treatment was required.

Tash started chemotherapy on April 27 but suffered some complications.

She was able to have three rounds of treatment, but the chemo had no effect and her family were told she had three to 12 weeks to live.

Tash and Simon were able to get married on May 22 at the Hospital Chapel organised by the hospital staff.

Tash and her family spent their remaining time together chatting, playing music and having lots of hugs and kisses.

On June 25 at 5.02am, Tash passed away surrounded by her family.

In a joint statement to the Echo, husband Simon, parents Kevan and Suzanne Longhurst, and sisters Bex Longhurst and Elly Dixon said: “Tash was many things to many people. She was a wife, daughter, sister, cousin, niece, honorary auntie, friend, travel buddy and colleague.

“She was able to spark a conversation with anyone she met, radiate a room with her presence and lived life to the full with no regrets.

“If she didn’t like something you know she’d tell you; you could always trust Tash to tell it to you straight.

“She made the most of her 25 years by filling it with adventure, joy and life, and completed it all by marrying the love of her life, Simon.”