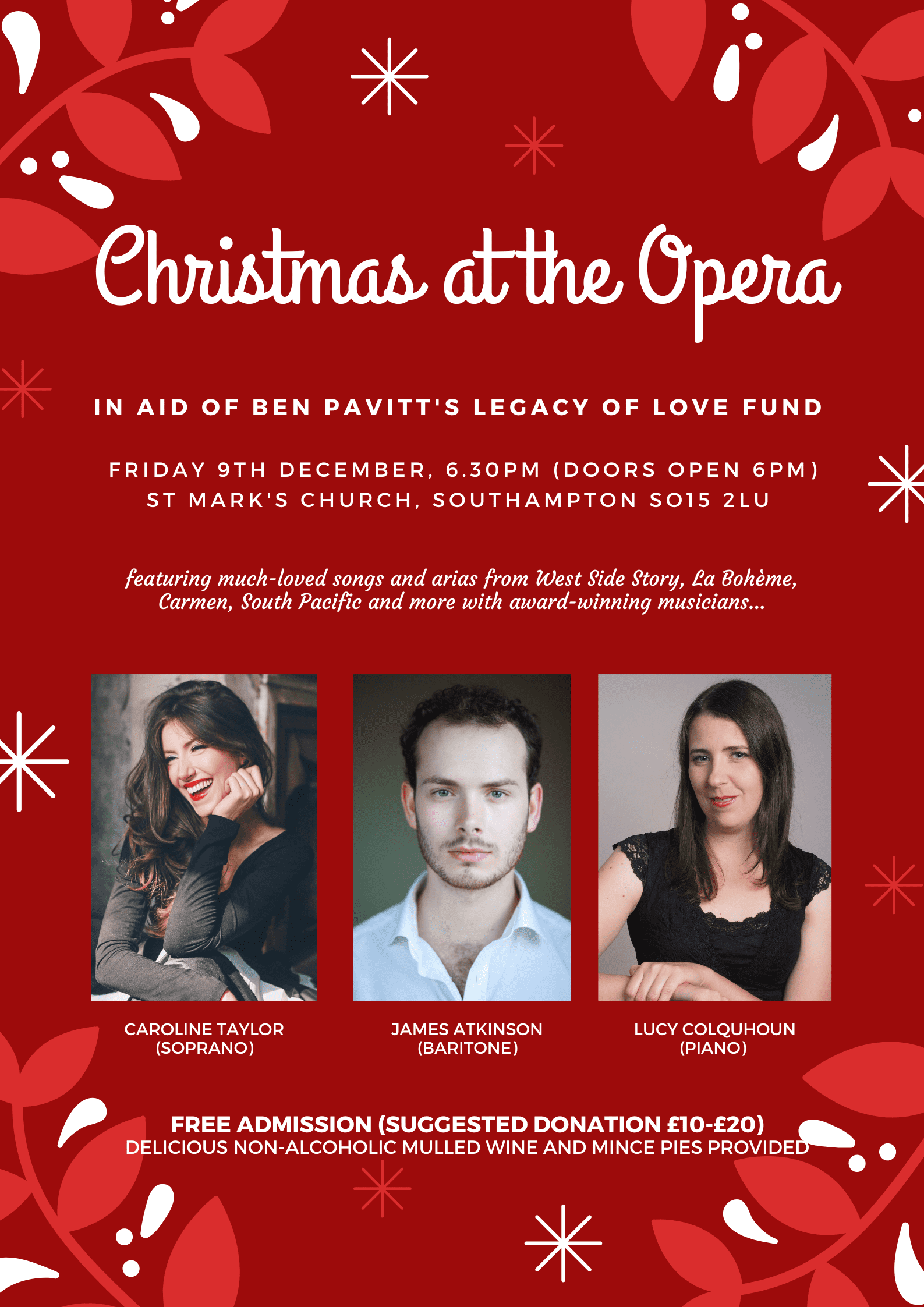 They are joined by celebrated British pianist Lucy Colquhoun in an hour-long programme of songs and arias from shows including West Side Story, La Bohème, Carmen and South Pacific alongside familiar Christmas favourites.

The trio are raising funds for Ben Pavitt’s Legacy of Love Fund, established in memory of Benjamin Pavitt who passed away in October 2021 following a relapse of acute T-cell non-Hodgkin’s lymphoblastic lymphoma, aged 16. This Special Named Fund focuses on research into children’s cancer of all kinds and has raised over £60,000 since its creation.

Ben’s father Mike Pavitt says “Childhood cancer should be our top research priority as a nation, not simply because no child deserves to be struck down as Ben was, but because we absolutely need the potential of our young people to be fulfilled. If we don’t do something about this now, we’re going to lose too many people like Ben, who, as someone who was always able to use his wit and intelligence in such a positive way, could have grown to provide immeasurable benefits to society.”

Caroline grew up in Southampton, where she attended the Gregg Preparatory School (formerly St Winifred’s) and then Stroud & King Edward VI School. Praised by The Times for her “glittering soprano”, this season she makes debuts at the Wigmore Hall, Longborough Festival Opera and English Touring Opera. She trained at Royal Northern College of Music and won the 2018 Joyce and Michael Kennedy Strauss Award and the 2021 Emmy Destinn Young Singers Award. You might recognise Caroline from Southampton Operatic Society’s (now SOS Presents) 2016 production of The Mikado, where her “stellar” Yum-Yum was nominated for a Curtain Call Award for Best Performance in an Opera (Southern Daily Echo).

James attended Bournemouth School, before starting studies at the Royal College of Music. Since graduating from the RCM Opera Studio, James has performed as a soloist with Welsh National Opera, Tokyo Symphony Orchestra and at the Wigmore Hall. He is the winner of the 2018 Maureen Lehane Vocal Awards and the 2022 Royal Over-seas League Singers’ Prize. Readers may remember James’ “terrifically lyrical baritone” as Papageno in Hurn Court Opera’s The Magic Flute in 2019 (Dorset Echo).

“We are thrilled to be raising funds for Ben’s Legacy of Love and hope to spread Christmas cheer to all those who can attend the concert! Thank you for supporting us and for supporting much-needed research into and awareness of children’s cancer.”

Admission is free (with suggested donation of £10-£20) and doors open at 6pm for a 6.30pm start. Delicious non-alcoholic mulled wine and mince pies will be provided.

More information about Ben’s Legacy of Love can be found on https://specialnamedfunds.cclg.org.uk/ben-pavitts-legacy-of-love-fund/.