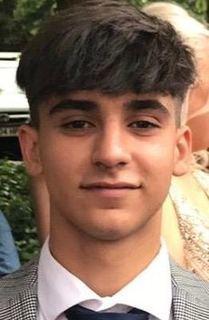 THE parents of a Hampshire teenager killed in an accident at a railway station have paid tribute to their “beautiful, intelligent and loyal” son.

Callum Evans, 17, of Pickwick Close, Totton, was electrocuted after he fell on to the track at Hinton Admiral station just before midnight on September 15.

An inquest into his death was opened at Winchester Coroner’s Court today.

In a statement issued a few hours later his parents said: “We are very sad to announce the passing of our much loved son, Callum Rhys Evans.

“We and his sister are devastated, heartbroken and we will never come to terms with the tragic and sudden loss of our son from a rail accident last week.

“Callum was a beautiful, intelligent, loyal and popular young man who had a life full of opportunities within his grasp.

“Callum was loving life at Peter Symonds College. He always had a smile on his face and a huge zest for life. He was a good friend and touched many lives.

“He loved basketball, photography, socialising , travelling, spending time with his friends and was looking forward to going to university next year.

“As a family we have been overwhelmed by the support we have received from friends, family and the local community and thank everyone for their kindness.

“We would like to ask that our family’s privacy be respected at this time and for us to be allowed to grieve and remember Callum in our own special way.”

Callum went to Hounsdown School in Totton before becoming a sixth-form student at Peter Symonds College in Winchester.

At the opening of the inquest Winchester Coroner’s Court heard that Callum was with friends at Hinton Admiral station when the accident happened.

Senior coroner Christopher Wilkinson said: “Sadly he fell on to the train tracks. His death was confirmed at the scene.”

A post-mortem examination carried out by pathologist Eleanor James gave the cause of death as severe electrical burns and a fall on to an electrified line.

The inquest was adjourned until May 18 next year, when a full hearing will take place.

In an email to college staff and students, Peter Symonds deputy principal Lucy Edevane wrote: “We understand that Callum Evans died in a tragic accident.

“Callum did not take his own life, nor is there any suggestion that there was anything untoward about the circumstances of this incident. It is simply a very sad accident.

“Our thoughts are very much with Callum’s family at this difficult time.”

British Transport Police have confirmed they are not treating his death as suspicious.

A spokesperson said: “Officers were called to Hinton Admiral station at 11.48pm on Tues-day 15th September following reports of an injured male who was found to have sustained injuries consistent with electrocution.

“Paramedics also attended but the male was sadly pronounced dead. The incident is not being treated as suspicious.”